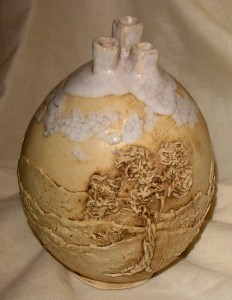 Since I arrived in Australia, 30 years ago, the country’s vast landmass, its timeless age and the ability of the fauna, flora and insects, to survive the harsh environment, has become deeply imbedded in my consciousness.

Australia’s skies seem endless, endowing me – the onlooker – with an overwhelming sense of unlimited space. Our horizons are limitless. The strong colours of the Australian landscape made a deep impression on my psyche.

I quickly became intrigued by the ability of trees and other native vegetation, to survive in the most unbelievably harsh climatic and soil conditions. Australia’s trees are truly amazing specimens!
They’re survivors.

They grow in swamps, where, in other climates, their roots would rot and die. Some tenacious trees grow straight out of minute cracks in rocks or, out of seemingly, solid ground. 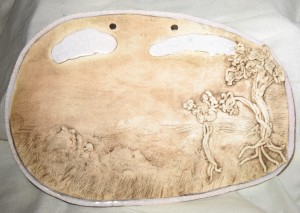 They cling to, and grow up the sheer rock sides of steep gorges, over tall mountains in extremely cold temperatures. Some even exist in the scorching heat of the inland deserts.

Some, such as the coastal mangroves, even grow in salt water and provide nourishment and shelter for the young of many kinds of fish species and bird life.
The sense of survival they project is a very powerful image.
Bushfires regularly devastate the Australian bush and there is a continuing process of renewal. 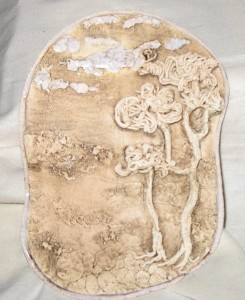 Amazingly, trees that have been damaged and hollowed out by fire, can regenerate from a thin layer of surviving tissue, to become, once again, part of the bush cycle of life.
The wonder of renewal begins within a few days of a devastating fire, with green leaves sprouting all around the trees. In a short time they are covered by masses of new growth

In my pottery, I have attempted to reproduce the feelings of survival, these landscape surroundings have aroused in me.

Following, an accident that prevented me from practising my art, for a long period of time, I’ve now begun to create some pieces, as a form of relaxation. 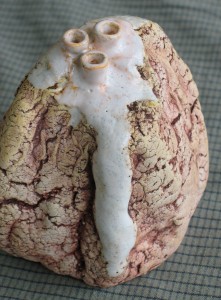 All are hand made at the kitchen table; rather than wheel thrown. Naturally, my attention strayed towards the Australian landscape and the topic of survival.

Over years of experimenting with clay, to create my own unique style of pottery, I’ve developed a great love for the decorative qualities of the clay body itself.

To retain the landscape image’s authenticity, and to add the textures found in the natural environment, as a three dimensional decoration in my work, I apply to the pot’s surface, thin slivers of crackled or textured clay, thin coils of extruded clay and thick slip, as decoration.

Wherever possible, I attempt to create, pleasing, fluid, eye-catching forms, and to add simply applied, interesting decoration to the finished pieces.

The few, small items, shown here, were created, to show the rugged and beautiful aspects of the Australian landscape.

All these pieces were made of white earthenware clay, decorated with texture and stained with an iron oxide/manganese wash.

A thick application of crackle glaze was used, to highlight the clouds and frame. 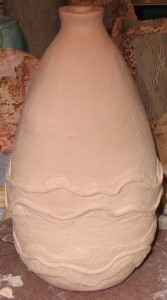 The slab built plaque is hand crafted, in white earthenware
clay rolled to a specific thickness.

While the slab is leather-hard, it is shaped and the background is first brushed, lightly, with thin slip and textured, so that gradually, the picture is built up in layers, using some laminated, textured clay, thin coils of extruded clay and thick slip, as decoration.
Further texture is added by using simple implements such as: the broken ends of sticks, etc, to add intensity. Once satisfied with the piece, it is allowed to dry, before being bisque fired. 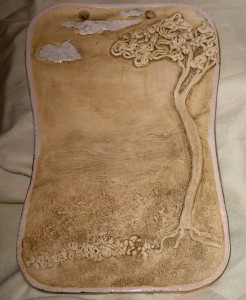 Decoration: To highlight the texture, the bisque fired piece is covered with an oxide wash, containing a mixture of iron oxide and manganese – or similar oxide wash material. This is sponged or brushed back, to create highlights and areas of interest, in the textured clay decoration.

Believing that ‘less is more’, when related to glaze finishes, I glaze the interiors of pots to seal them and use only limited amounts of decorative glaze, on the outside surfaces, to create highlights of openings and special features. Using the textured clay body as decoration, rather than smothering the piece with a solid coating of glaze, allows the unique qualities of crackle and other special effect glazes, to create subtle highlights of colour and texture, to enhance my landscapes.

Let’s look at the construction of the small landscape pot featured at the top of this post.

This little pot is hand-made from white earthenware clay. Two pinch pots were joined together with thick clay slip and it was shaped, while still sealed, by lightly beating with a balsa paddle.

A foot was attached to the oval-shaped pot, so the eye could travel around the oval form. It was pierced, chimneys added and it was decorated with a clay landscape, made from fine, clay coils and dabs of thick slip that I textured and brushed.

When bisque fired, the pot was stained with an oxide wash. A crackle glaze was painted on both the clouds and the top of the pot, before it was gloss fired.

Later, when it was cool, the crackle in the glazed areas was enhanced, with a black stain and it was polished, to remove unwanted stain from the glaze surface and expose the fine cracking. 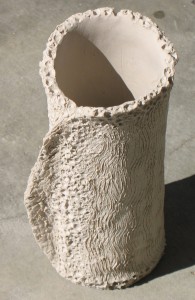 I have always been fascinated by the wonderful weathered and hollowed patterns, in the sandstone cliffs and rocks, found around the East Coast beaches of Australia.
The set of three seascape pots, were slab built, as low-fire, white, earthenware clay cylinders, to which a base was added and trimmed. The openings were compacted, and shaped and the forms were finished, by shaping with a balsa paddle.

Once the flange was compressed and shaped, the wave pattern was combed on the outside of the pots and the sandstone finish, was added to the baseline.

I began finely slicing the flange with a fine, sharp, scalpel blade, and later, created the sandstone texture with a series of sculpting tools. 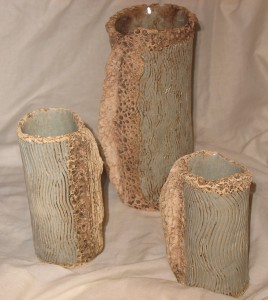 The glaze finish – a tad light in colour –
is a low-fired earthenware glaze: ‘Sea Foam’, and the textured sandstone surface is stained with a mix of red iron oxide and manganese.

In future, I would try for a slightly deeper sea blue glaze – to give the waves more depth – and maybe – brush back the surface glaze, to create a matt surface.

This coming year, I will be working with some new clay – paper stoneware clay and a fine, china clay. These will allow more creative construction methods to be implemented to build larger pots. I will fire these to higher temperatures to produce more vibrant glaze effects.

I’ll also be adding vibrant colour to the decoration of my pots, using oxides, coloured slips, brightly coloured underglazes and stains, to create some drama in my landscapes. 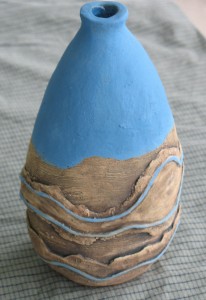 As well I will be working on a series of
ceramic jewellery pieces made in
coloured porcelain, terracotta and
white earthenware. 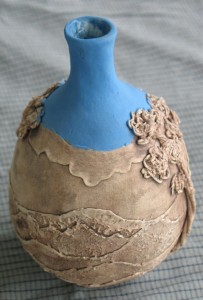